The culture versus commerce debate has plagued book publishing for long enough. Publishing is cultural institution. It’s also a business. With skim financial margins and incredibly competitive arts funding, some writers and publishers are looking to crowdfunding platforms as a means of earning money for their creative projects.

Kickstarter is a global crowdfunding platform based in Brooklyn, New York. The site launched in April 2009 and the company became a public benefit corporation in 2015, necessitating it to balance public interest and impact with profitability.

⁠ Are you a small press publisher? We’ve got an open call just for you. This September, you're invited to launch a small press project as part of our monthlong celebration of indie zines, comics, and more. Find out how to get involved at the link in our bio.⁠

Since its launch, AU$167.38 million has been pledged to projects under the Publishing category and 15,333 Publishing projects have been funded. Publishing is the fourth highest category for successfully funded projects (the highest is music with 30,000+ projects).

There are currently 337 Publishing projects being funded on Kickstarter. Individual authors, small and large publishers and literary organisations are all utilising Kickstarter’s in-built audience to fund creative works.

Thornwillow Press is a publisher, printer and binder of specialty books and custom stationary. It was founded by Luke Ives Pontifell in 1985 and based in Newburgh, New York. Thornwillow creates letterpress printed, hand-bound books.

Their presence on Kickstarter is not at odds with a company that has a strong reverence for the print book. Margot Atwell, Director of Publishing at Kickstarter, points out that Thornwillow uses Kickstarter as ‘a way to create visibility for the work they’re doing and also to tell that story’.

Thornwillow joined Kickstarter in July 2016 and has since created 27 projects and backed 12 projects themselves. These include a letterpress printed and handbound edition of Agatha Christie’s Death on the Nile, Jane Austen’s Pride and Prejudice, and Dante’s Inferno as well as engraved calendars, rainpaper notebooks, and broadside portfolios on American Protest, Subversion, and Alternative Facts.

It is with great excitement and pride, that we present the Thornwillow Press edition of Jane Austen’s beloved classic, Pride and Prejudice! We can’t wait for you to see it! Visit our Kickstarter project to help make this publication possible.

These campaigns do more than just provide an avenue to potential funds. They are spaces to build Thornwillow’s brand beyond the standard social media sites like Facebook, Twitter, and Instagram. (Though, having live Kickstarter projects means that Thornwillow consistently has productive content to share via their more standard social media pages).

Kickstarter’s multi-modality platform enables Thornwillow to create visibility for their work through a range of rich media and communication channels. They use high-quality videos, gifs, social media and email to do what Atwell points out is an extremely old thing: ‘get people to pledge to…subscribe to the book before it exists’.

How Independent Publishers Can Leverage Kickstarter

In her role as Director of Publishing, Atwell works with independent publishers, creators of books from underrepresented communities, and literary spaces and community organisations to create effective Kickstarter campaigns.

Independent publishers are a particular focus of Atwell’s because she believes they’re the most resource-strapped and the most likely to be nurturing new voices and taking risks.

So how are independent publishers particularly poised to take advantage of Kickstarter? Creative freedom and audience-building.

The creative industries and performing arts are relatively siloed. ‘People always want you to fit your creative project in a box that already exists, so they know what to do with it,’ Atwell remarks.

Creative projects on Kickstarter must fit into one of the fifteen categories on the platform. But they can span more.

On Kickstarter, ‘You can work across category and across genre.’ The platform allows a lot of creative freedom because ‘it doesn’t insist that you make your thing smaller than it is to fit into a box that someone else has already created’.

Kickstarter allows publishers to test the market potential for an idea before it’s even made. Previously, concerns over market and genre expectations might have prevented publishers from taking on projects that only fit within the margins. 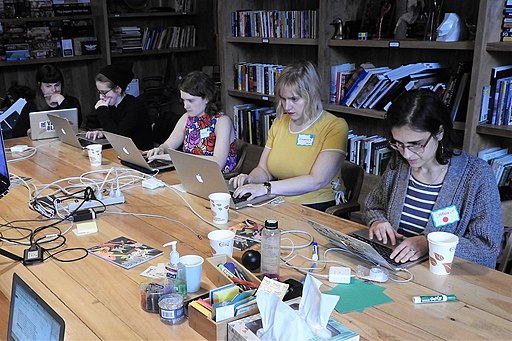 While no project is guaranteed to be funded on Kickstarter, the platform does have a robust repeat backer community. Atwell herself is deemed a ‘Superbacker’, having supported 476 projects since 2012.

A third of Kickstarter backers are repeat backers over time. While this percentage has stayed relatively steady over time, the number of backers (and repeat backers) has grown incredibly.

And backers aren’t loyal to only one category once they’re in the Kickstarter ecosystem. ‘We see when a major project comes in, backers of that project will then go and back other projects, sometimes not even in the same category.’

Atwell says that while people think about Kickstarter really specifically in the financial realm, ‘it’s the weird secret of Kickstarter publishing that it’s actually an audience-building platform as much as a funding platform’.

One of the things that often troubles creatives about Kickstarter is the all-or-nothing funding mechanism. That is, if you don’t reach the funding goal you’ve set for your project, backers’ cards aren’t charged and you don’t get any of the money. For Atwell, this is a built-in safety measure for both creators and backers.

But it can also be a way of further expanding your audience. Atwell adds: ‘That all-or-nothing mechanic also means that if I’m a backer and I’ve given someone my $25 because I want their book and they’re falling a little short of their goal, I’m going to tell my three friends who I think might like that book and maybe one or two of them will jump in and back it [too].’

Backers therefore can become word-of-mouth advocates for projects, not just a passive purchaser of the book. The power of word-of-mouth has been a truism of the publishing industry for a long time but, as Atwell says, publishers are leaving money on the table by not fully exploring how we can generate word-of-mouth.

⁠⠀ Sure, your project might tap into an unexpected outpouring of support from all over the web, but that’s the exception—not the rule. That’s why we encourage creators to focus on rallying support from people who already know their work: fans, friends, and community. At the link in our bio, read tips on spreading the word about your idea and getting people as excited about your project as you are.⁠⠀

Relationships developed between creators and backers on Kickstarter can be brought into the real world.

‘Learning a greater facility with the idea of building relationships between publishers and readers, and authors and readers, that’s what’s going to be what helps publishing thrive into the next generation because individuals expect more access than they’ve ever had before,’ Atwell says. ‘Figuring out ways to give that access in a productive way will create a really engaged and loyal fanbase.’

Kickstarter’s creative ecosystem is a rich platform for independent publishers and creators of all types to build their audience, fund their work and tell their story.

Claire is a PhD candidate, research assistant, sessional lecturer and tutor in Publishing and Communications at the University of Melbourne. She will be presenting her research on Kickstarter at the Independent Publishing Conference on 21 November 2019 in Melbourne, Australia.

View all posts by gspcoordinator

This is Us Now by Jacinta Dietrich

Welcome to Bellevue by Seth Robinson

Force and Fraud: A Tale of the Bush by Ellen Davitt

An Australian Girl in London by Louise Mack

Melbourne and Mars: My Mysterious Life on Two Planets by Joseph Fraser

Calling all book reviewers! Grattan Street Press is looking for reviews of contemporary Aussie fiction, non-fiction and poetry. Please send us your reviews via Submittable and check the link in our bio for submission guidelines. We'd love to hear from you!
"Ever since I entered university, the recurring joke of my life has been that there is no way I’ll ever get a job. I’m an arts kid, so that means that instead of choosing between the thousands of job prospects that are readily available to my friends in commerce degrees, the jobs I’ll choose between are the one at McDonald’s and the one at Hungry Jacks." Andrea Septién Uribe breaks down the assumption that Arts students are unemployable, giving hope to those who may be feeling discouraged to follow their passions. Read at the link in bio.
"This is my writer’s origin story; how I went from burning through six story ideas in five months, to writing 85,000 words in just four. In this article, I share with you a variety of screen-writing resources from some well-known screenwriters, which have helped me immensely in my novel writing journey." Taylor Doyle dives into how she has taken the teachings of screen-writers and applied them to her own writing journey, and how you can do the same. At the link in bio.
"They say it takes a village to raise a kid. Well, a dog isn’t any different." Read Xuan Wei Yap's blog on what it means to adopt a pet during a pandemic, taking us through the highs and lows of dog parenting. At the link in bio.
Thank you once again to everyone who came along to the Grattan Street Pitch and got involved last week.